Looking at these technical possibilities, it’s not that remarkable contemporary film regularly tends to set aside the spacial and material limits of the two-dimensional screen. Thus it gets even more intriguing when a film style focuses on the surface of the screen, flattening everything that fills the background of the mediated space. Haptic visuality, as conceptualized by Laura Marks in the late nineties, centers around the conviction that an immediate connection between the surface of the screen and the viewer can be established when a specific film style is plied.[1] The eyes of the viewer then serve as organs of touch, while the viewer himself (as a thinking subject) can engage in the reflection on the imaginative construction of the cinematic image.[2] As a result, an equal and intersubjective relation between the (active) beholder and the visual product can be shaped.[3]

Haptic visuality in a new context

Marks developed her idea of haptic visuality in a 1998 edition of the British magazine Screen, after which she published The Skin of Film, an account of the ongoing dialectic between cinema and the senses.[4] In this essay, I will apply the concept of haptic visuality to a cinematic convention that is compliant with the conceptual characteristics that Marks discusses in her 1998 essay.[5] I will argue that haptic visuality can become especially relevant for contemporary film if the concept of breaking the fourth wall is involved. Breaking the fourth wall has been a stilistic option in cinema since a revolver shocked the audience in Edwin S. Porters The Great Train Robbery (1903). There nonetheless is no single objective or manner of use that has prevailed ever since; a character gazing into the camera can mean many things, and any meaning that is granted must be read in the context of the entire film or even a specific scene. Because of that, I have decided to center my argument around two filmic examples, in which the straight gaze of a character is both a source of (potential) meaning and a case for the central concept of haptic visuality.

The gaze of complicity

The last shot of Alejandro González Iñárritu’s The Revenant (2015) is a stunning example of the fourth wall being broken. Leonardo di Caprio plays Hugh Glass, a trapper who gets left behind by his comrades after a group of Arikara tribes violently attacks them in unorganized territory. Glass manages to stay alive, and after a long journey through wilderness, he avenges the selfish frontiersman who left him. The moment that struck many viewers appears at the end, before the credits roll. Di Caprio suddenly gazes into the camera, supposedly making the viewer complicit in his suffering. It is in his ground-breaking book Ways of Seeing that John Berger says a basic next step of the viewer/seer is to realize that he or she can also be seen.[6] This is exactly what is happening here, although the method can come across as quite shocking or even violent, because the illusion of mediated fiction suddenly gets abrogated.

Even kings are mortal

La Mort de Louis XIV, directed by the Catalan filmmaker Albert Serra, is a movie that deals with the same theme as The Revenant: mortality.[7] We follow king Louis XIV of France in the days and hours before his death (1715), as we stay in the weakly lighted rooms of his famous palace in Versailles. There is one specific shot that I would like to discuss here: when the movie is about halfway, there is a moment when Louis’ faithful servants leave the room, while the camera stays with the king, sitting up straight in his bed. As the music (a classical version of the ‘Kyrie Eleison’) gradually swells, Jean-Pierre Léaud’s (having reached his mortal age after playing the young kid in Truffauts Les Quatre Cents Coups) gaze pierces the camera, confronting the viewer in the same way Di Caprio does in the last shot of The Revenant.[8] The explicit function of the fourth wall being broken is that this act neutralizes the distance between the viewer and the viewed. The viewer can almost touch the object (i.e. the cinematic subject), and, as Berger has said, to touch is to situate oneself in relation to it.[9] The difference between the body of the viewer and the body shown on the screen has faded. Consequently, the human suffering that is shown in the discussed shots from The Revenant and La Mort de Louis XIV has become ours; we can no longer escape it, because it is our very own body that’s suffering. 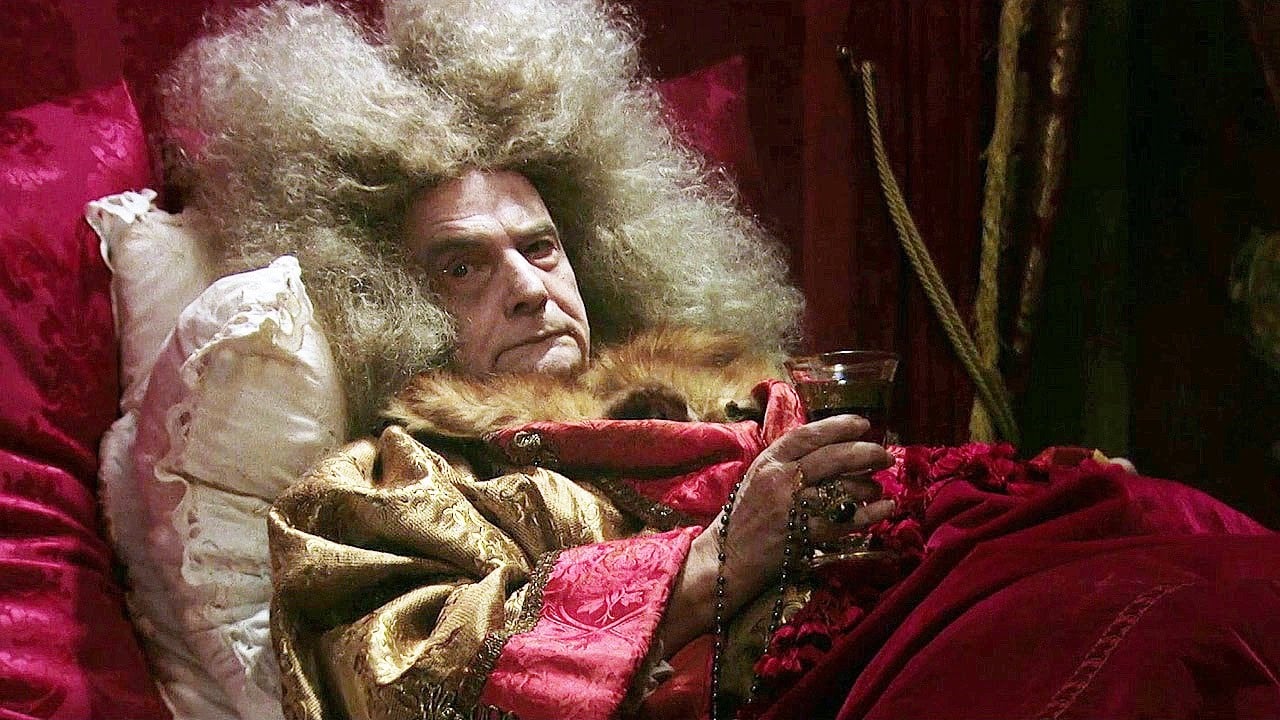 Strictly seen, the shot from The Revenant is much more haptic than the shot from La Mort de Louis XIV. As Marks has pointed out, ‘haptic looking tends to rest on the surface of its object’.[10] The surroundings in the shot from The Revenant  have been blurred by Emmanuel Lubezki’s telephoto lens, which makes the close-up of Di Caprio’s face even more tactile than the close-up of Léaud’s. The shot from La Mort de Louis XIV shows the interior surrounding the king, thus emphasizing the production design instead of focusing fully on the face of Léaud.[11] Nevertheless I defend the theorem that both shots can be interpreted as representative examples of haptic visuality.

When subject and object intertwine

Both shots pull the viewer out of his or her passive experience as a viewer. The viewer cannot choose to identify with the character, as the character has already chosen the viewer to become a part of his or her experience. The gazes of Di Caprio and Léaud do not lie; they almost force their mortality upon you. Their gazes enter the non-cinematic world of the viewer, meeting our gazes in the middle. The regular points of view of both the subject and the object almost cease to exist, because they are intertwining.[12] We can talk about the type of consciousness here that the French phenomenologist Maurice Merleau-Ponty discusses in his book The Visible and the Invisible (1968).[13] Our eyes literally become, also quoting Merleau-Ponty, ‘windows of our soul’[14], opened by the mortalized gazes of the immortal shadows on the screen.

Body identification
It is in Video Haptics and Erotics that Marks states haptic cinema makes us consider the way cinema appeals to our own bodies.[15] This is exactly what the fourth wall-breaking shots from these two movies do: they make the beholder respond to the video/film as another body, and to the screen as another skin.[16] An equal relation between the viewing subject and the object can be shaped, because the act of viewing causes subject and object to constitute each other’s identity.[17] The theme of mortality is communicated throughout a single gaze in the cases of both The Revenant and La Mort de Louis XIV. Di Caprio and Léaud are looking at us, thence making us aware that we are in the same position. At once the viewer gets the feeling that he can touch the object possessing and habitating the surface of the screen, as the illusion boundaries of depth are reduced or even removed, and the fourth wall seperating the viewer and the viewed is broken.The Revenant and La Mort de Louis XIV are thus perfect examples of what Joseph Boggs called the ‘cinematic film’; these movies take advantage of all the special properties and qualities that make the film medium unique.[18]

Haptic visuality in cinema implies that oneself becomes vulnerable to the image. When the fourth wall gets broken, the viewer has to acknowledge that he has lost his optical mastery.[19] Distance is replaced by necessary interaction. The Spanish researcher Eduardo Ledesma has pointed out that the process of creating meaning through optical vision doesn’t serve as a satisfying explanation for the ways in which films can really move or ‘touch’ the viewer on a more emotional plane.[20] As cinema is increasingly pushing its own creative and technical boundaries, and breaking the fourth wall is a prevalent stylistic option, the combination of haptic visuality and contemporary film could become an intriguing starting point for further research.

[1] Marks traces the term ‘haptic’ to the way art historian Alois Riegl characterized Egyptian art. In Egyptical relief, ‘’space relations are avoided or, as far as they had to be considered, are cunningly transformed into relations on the plane’’. By focusing on mass and surface, every connection with the beholder of the image got deemphasized. Antonia Lant, ‘’Haptic Cinema’’, October 74 (1995), 50, 65.

[4] I am well aware that Marks is primarily dealing with video in her 1998 essay. In this essay I will deal with film without denying the existence of resembling and/or comparative qualities for video. This in only partly because the fascinating examples I found drew me towards film; I also think the differences between film and video are fading (or have already faded) in contemporary society.

[5] Marks doesn’t deal with the concept of breaking the fourth wall herself.

[7] A Dutch review of this movie can be found here: https://www.filmvandaag.nl/recensies/583-la-mort-de-louis-xiv

[8] This example of breaking the fourth wall becomes clearer and much more powerful when you watch the film and you hear the music accompanying the shot.

[11] The music makes it even clearer that Léaud (nonetheless) is the central object of the image, but as my argument centers around visuality, I will not lay extra focus on the musical component in the main text.