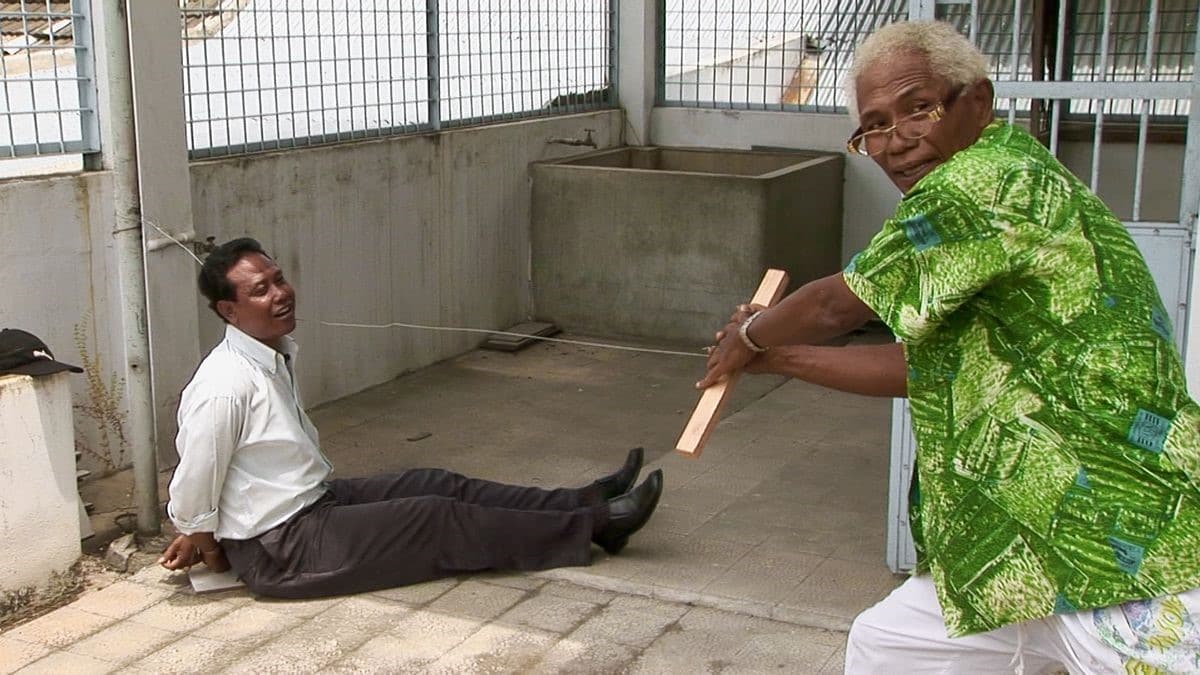 In this specific film,the re-enactments of the killings cannot be seperated from the defining role of the director.[4] Oppenheimer iniatiated them, and actively intervened when Congo’s self-reflection transcended his initial pride:

Joshua Oppenheimer: Actually, the people you tortured felt far worse—because you know it’s only a film. They knew they were being killed.

Anwar Congo: But I can feel it, Josh. Really, I feel it. Or have I sinned? I did this to so may people, Josh. Is it all coming back to me? I really hope it won’t. I don’t want it to, Josh.

This essay examines one of Oppenheimers fundamental choices in the process of directing the film: to mediate the truth of the film through ‘’ artifacts, through emotional and poetic force, through [Anwar’s] personal process.”[5] This approach tends to set The Act of Killing apart from documentary cinema’s conventional engagement with politics.[6]  There is no intersubjective space containing an overaching political argument, nor does the film use any persuasive or expository arguments to convey some explicit moral message.[7] To which extent, then, does a defining critique on this personal, mainly apolitical approach weigh up to Oppenheimers own artistic, pragmatic and moral considerations?

The psyche and the polis

In her essay Unsettling Redemption, British law scholar Sara Kendall argues that the importance of Congo’s psyche tends to exceed the importance of the polis, or the larger political system in Indonesia. This is actually true when you look at the set-up of the film: Kendall quite righly states that ‘’little historical framing is provided beyond (…) the text [that] accompanies the film’s opening moments’’.[8] While the psychological process of Anwar Congo could possibly be seen as a metonymia for the Indonesian political system, this implicit link is never made evident throughout the film. Kendall concludes that ‘’the risk with this emphasis on the personal journey lies in foregrounding the psyche over the polis, and with privileging affective sentiments concerning the individual over political transformation.’’[9] Australian historian Robert Cribb firmly criticizes the film when he states that ‘’[The Act of Killing] makes no attempt to evaluate the truth of Congo’s confessions. Despite persistent indications that he is mentally disturbed,…, the film presents [the] claims [of Congo and his friends] without critique’’.[10]

Indeed the film may harbour a problematic tension for the morally involved spectator, precisely because Oppenheimer and his crew refuse to moralize or steer the perpetrators’ self-reflections.[11] Therefore, the argument here is not simply that the critique of amorality cannot be valid in the context of these war crimes; instead, I argue that a documentary rigidly foregrounding the polis, thus framing the collective guilt of the war perpetrators, could never have had the effect of eventual self-realization that distinguishes The Act of Killing.

Throughout the film, it becomes evident that the perpetrators are still safeguarding their own historical account of the mass killings: ‘’war crimes are defined by the winners. I’m a winner’’, says one of them. Oppenheimer therefore needed to engage Anwar Congo, who was consciously holding on to this idea of mass victory, in non-cognitive ways: he had to create ‘’an informative resource out of the perpetrators’ unconscious, their self-consciousness, and the disjunctions between the two’’.[12] This also underlines the impossibility of foregrounding the polis, because it is the individual only who could possibly give Oppenheimer and his crew some access to the real polis beyond the moral facade. As Oppenheimer himself claimed in an interview: ‘’the boundaries between Anwar as a person and the political regime have been dissolved. He’s holding it all. I could not have had any kind of political ending; it had to solely reflect Anwar’s psychological state.’’[13]

The core sequence for this argument shapes the idea of closure that the film ultimately provides: whereas The Act of Killing surrealisticly starts with Anwar Congo singing, dancing the cha-cha-cha and rationally re-enacting his ‘crimes’, one of the film’s closing sequences shows how Congo is vomiting while his body is ‘’performing the drama of stupefaction’’.[14] The defining transformation that has taken place indirectly supports Alex Edney-Brownes claim that ‘’memories that contradict the official narrative have long been buried within the social unconscious’’.[15]

Through the act of showing and observing, Oppenheimer emphasizes that Congo’s physical reaction is real and unmediated by his direction. Errol Morris (a documentary-maker himself and an executive producer of the film) queried whether the vomiting is ‘’one more performance for himself and for us’’, while Robert Cribb even claimed that ‘’Congo and his associates seem to have been lured into working with Oppenheimer, only to have their bizarre and tasteless fantasies exposed to the world to no real purpose other than ridicule’’.[16]

The skepticism of Morris and Cribb (among other critics) might be a defining paradox for the discours that surrounds the film’s characterization. The Act of Killing is no political essay, but a filmic recollection of memory; and yet we are talking about truth claims. Is this the eternal curse that keeps haunting the process of framing ‘documentaries’, considering Oppenheimers ‘docudrama’ received an Oscar nomination in 2013? In that case, it’s only a relief that The Act of Killing did not win.

‘’ The images of art do not supply weapons for battles. They help

and what can be thought and, consequently, a new landscape of

the possible. But they do so on condition that their meaning or

Cribb, Robert. ‘’Review: An act of manipulation?’’. Inside Indonesia. http://www.insideindonesia.org/review-an-act-of-manipulation (Accessed May 11th, 2018).

Weiner, Jonah. ‘’The Weird Genius of ‘’The Act of Killing’’’’. The New Yorker. https://www.newyorker.com/culture/culture-desk/the-weird-genius-of-the-act-of-killing (Accessed May 10th, 2018).

[3] Oppenheimer recalls that they were ‘‘more than willing to help . . . boast-fully describing their crimes against humanity. . . . Local police would offer to escort us to sites of mass killing, saluting or engaging the killers in jocular banter.’’ Janet Walker, ‘’Referred Pain The Act of Killing and the Production of a Crime Scene’’, Film Quarterly 67 (2013), 14.

object, but instead can be read alongside the commentary that its makers provide.’’ Sara Kendall,  ‘’Unsettling Redemption: The Ethics of Intrasubjectivity in The Act of Killing’’, Media Tropes VI (2016), 26.

[10] Robert Cribb, ‘’Review: An act of manipulation?’’, Inside Indonesia, http://www.insideindonesia.org/review-an-act-of-manipulation (Accessed May 11th, 2018).

[12] Alex Edney-Brownes explains that ‘’ His [=Oppenheimers] use of re-enactment and examination of media affect as investigative techniques allowed him to draw upon his subjects’ moments of self-consciousness and their unconscious thoughts as informative resources. To achieve this, media’s psychological and physiological affects were harnessed to circumvent the cognitive responses of the subjects. This process was continued by the perpetrators’ themselves, who began to design their re-enactments in the style of fantasy and horror films as a way to communicate their memories. Edney-Browne, ‘’The Act of Killing’’, 59-60.

I wrote this essay for a course on Contemporary film movements.
University of Antwerp, spring 2018.

3 gedachten over “Emotional truth over politics? The voice of the director in The Act of Killing”